On May 8, PCCFFAP joined with thousands of public school teachers across Oregon demanding schools be fully funded.

Have you been affected by PCC Administration’s latest layoff notices or program closures? How has your students’ success been impacted? Your Federation urges all members to wear blue this Thursday evening at the PCC Board meeting. You can also sign up to speak at the meeting if you choose.

The uncertainty that has been placed on many of us is a huge distraction from our teaching or academic jobs. Instead of focusing on student issues, we are forced to begin searching for new employment and perhaps new healthcare providers. Many of us have decades of experience and will have to battle rampant age discrimination to find new work. It will require our full and immediate attention to replace the pending loss of income. Our focus will invariably shift away from student success.

Meanwhile the academic paths to student success have been obliterated without a plan in place to replace them. If a bridge needed to be updated, should it be blown up before the replacement plans have even been begun? Administration says they will map the student paths soon but they want to minimize the involvement of the existing experts in the field.

Please join us to tell the PCC Board how Administration’s decisions are affecting your students’ success. Wear blue and stay as long as you can! You can optionally sign up to speak at the end of the meeting. Testimony is limited to two minutes and we encourage you to focus comments on your own perspective and experience.

While the Board cannot change Administration’s policies, key PCC administrators and President Mark Mitsui will also be in attendance. It’s important that they see our support for our fellow members, especially as the difficult financial portion of bargaining negotiations is about to begin.

I hope to see you there in blue! 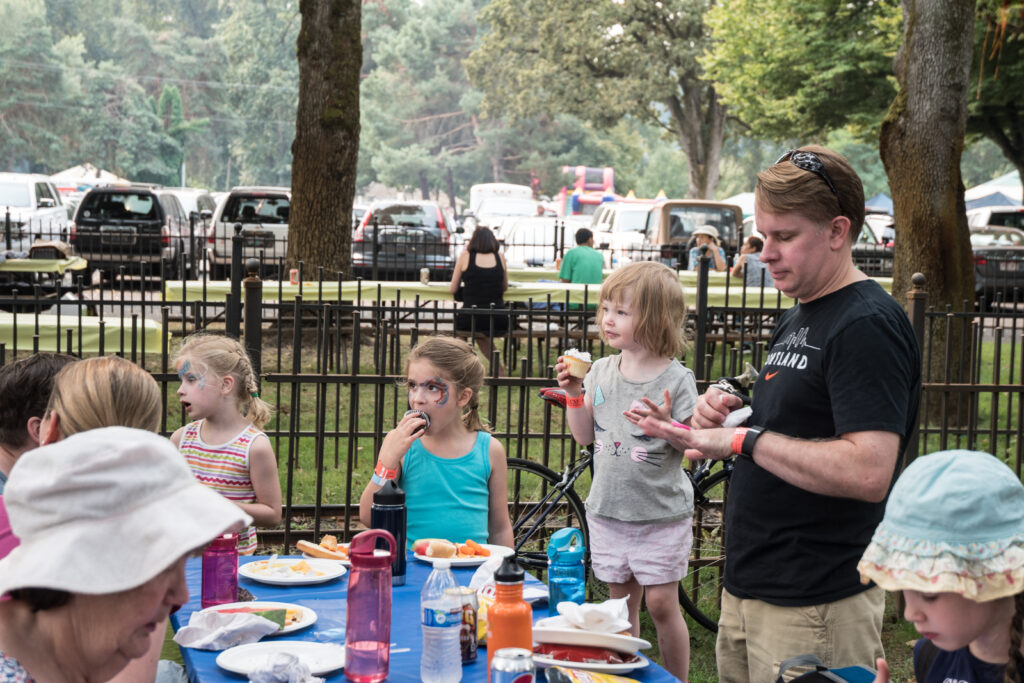 Join the FUN at the Faculty & AP Picnic!

Please join us at our union’s annual back-to-school picnic this Friday, September 28, from 5-7pm at Willamette Park (near John’s Landing, just south of downtown Portland along the Willamette).

Partners, children and friends are all welcome! There’s a playground at the park, and we’re right next to the river for great views and strolls.

Again, welcome back to AY 2018-19. We look forward to seeing you and socializing at our union picnic this Friday!

The Oregon Student Association asked us to pass along this information to all PCC faculty.

You may have seen emails from the Oregon Student Association  regarding the Vote OR Vote campaign, asking for a few minutes of your class time to help students register to vote and educate them about voting. A lot of you said yes, and thanks to your assistance, we managed to register over 2000 PCC students (and a handful of instructors) on all four campuses, and we provided non-partisan voter education to close to 4300 students before the May 15 primaries.

We couldn’t have done it without faculty support, so on behalf of ASPCC and the Oregon Student Association, many thanks for opening your door to our campaign! Fair warning: you are about to receive more emails from us, as during election years we continue voter registration through the Summer and Fall.

So, why should you let us into your classes?

So please, when you get that message from ASPCC students asking for access to your classes, take a minute to answer, hopefully in the positive. We look forward to meeting with you all and visiting your
classes in the Summer and/or in the Fall!

If you have any questions, feel free to email:

Now in both Portland (RSVP here) and Eugene (RSVP here)—join fellow members this Sunday at 12 PM to protect our healthcare from devastating cuts. The special election for Measure 101 is less than two months away! See David’s email below for more …

Your income shouldn’t determine whether you can visit a doctor or get medicine when you’re sick. Measure 101, up on the ballot this January, will protect healthcare for vulnerable Oregonians, including seniors, people with disabilities and 400,000 children.

That’s why AFT-Oregon has joined more than 100 other organizations in endorsing a YES vote on Measure 101.

We urgently need to get the word out about Measure 101, with a special election just two months away. Please join us on Sunday, December 3rd:

Supporters of all ages, backgrounds and abilities are welcome. Rain ponchos will be provided. There will be snacks and a rally from 12:00-1:00PM, and then we’ll hit the streets together to get the word out about Measure 101 and protecting healthcare for vulnerable Oregonians.

Oregon families are counting on us. Will I see you there?

Your FFAP and FCE Joint Bargaining Team (JBT) met with the administration team on August 22nd and 24th at the CLIMB Center. The Federations made an alternative proposal and the admin team has agreed to cost it out. The JBT is now hopeful that a framework for the contract can be agreed upon soon, even though we are still significantly apart in dollars.

The admin team also made some more funds available for the contract because of proposed FSLA regulations not being implemented at the Federal level.

Interested observers are encouraged to sign up to attend the next meetings at the CLIMB Center. Observers get to provide immediate feedback to the JBT during caucuses and after the meeting. Your attendance is not only valuable as a show of solidarity, but it also helps to spread the word to your colleagues about the negotiations.

Here are some things you can do right now:

Your FFAP and FCE Joint Bargaining Team (JBT) was scheduled to meet with the administration team on Friday, Aug 11th at the CLIMB Center. At 5:38pm on the 10th, we received an email from admin. They apologized for the late notice and said they had to cancel the meeting because simply put, they weren’t ready. They said they had been working on various costing options and needed more time to put together a proposal.

The JBT had to spring into action to notify all participants and observers that the meeting had been cancelled. Unfortunately, not everyone received the notifications and some observers showed up to the CLIMB Center Friday morning.

While this late cancellation caused us some undue inconvenience, we are hopeful that this is a positive sign. Admin has yet to present an official proposal, so it would be a constructive step to receive one at the next meeting, scheduled for 9am on Tuesday, Aug. 22nd.

That’s the day after the eclipse and traffic is expected to be fierce. Interested observers should plan on arriving much earlier than the normal 8:45 meeting time in case of traffic delays. The Federations will provide some breakfast munchies for the early arrivers.

Interested observers are encouraged to sign up and attend the next meetings on Tuesday, Aug. 22nd and Thursday, Aug. 24th at 9am at the CLIMB Center. Observers get to provide immediate feedback to the JBT during caucuses and after the meeting. Your attendance is not only valuable as a show of solidarity, but also helps spread the word to your colleagues about negotiations.

Many of you have expressed frustration about the slow progress in bargaining this summer. While we are working hard and hoping for the best, we are also starting to plan for the possibility that the academic year will begin without a settlement. If this happens, we’ll be asking you to get more involved to help us move forward. We continue to believe that there are resources in the budget for a fair and reasonable contract.

Here are some things you can do right now:

Your FFAP and FCE Joint Bargaining Team (JBT) met with the administration team on Friday, Aug 4th at the CLIMB Center, for a scheduled meeting from 9am to 12pm. There were no new items on the agenda.

No official proposals were offered, but there was constructive dialogue on how to achieve some of the federations’ top priorities while still meeting the college’s budget constraints. This discussion will help create concrete proposals shortly.

An additional meeting date of Thursday, August 24th from 9am to noon has been added to the schedule.

We are encouraging interested observers to attend the next meeting on Friday, August 11th at noon at CLIMB. We need as many observers as possible to be a visible presence and show solidarity.

Will Mahoney-Watson, Acting VP of Communications, guest-writes this bargaining update.

Your FFAP and FCE Joint Bargaining Team (JBT) met with the administration team this week on Thursday, July 27th at the CLIMB Center, for a scheduled meeting from 9am to 3pm. There were several new items on the agenda.

After some initial discussion, FFAP President Frank Goulard presented a revised proposal which would lower some costs by phasing in implementation over the next two years. The Admin team reviewed the proposal and although their cost estimates were higher, they agreed that this was a good start.

However, the estimated costs are still much higher than the $2.6M that Admin has budgeted. The JBT questioned several aspects of the budget, including higher costs for new management positions and for many contingency funds. The Admin team did not address these concerns, stating simply that the budget is designed to follow fair labor practices. Admin did express concerns about the continuing declines in enrollment and its impact on the budget. The JBT pointed out that the growth of management positions during a period of declining enrollment was running counter to national trends.

The JBT emphasized the need for compromise on both sides of the table. Frank offered another suggestion that modified the proposed costs yet still preserved Federation priorities for its members. Admin appreciated the additional dialogue and responded that they needed to speak with their folks, after which the meeting adjourned.

The JBT is hopeful that Admin will be able to increase its meager budget allotment of $2.6M. Due to a 2015 Oregon Supreme Court order reversing a 2013 Legislative PERS reduction, all employees in the bargaining unit will be receiving a 1% reduction as part of the 2017-2019 budget’s Cost of Living Adjustment (COLA). The JBT feels that Admin should be able to reallocate its priorities to assist our employees, who are already feeling the pinch of Portland’s tight housing market and other costs of living.

There was another outstanding turnout of member support, as over 20 observers showed up to watch the negotiating sessions and to engage in lively debates during the caucuses. They also enjoyed breakfast snacks and a delicious lunch. The JBT greatly values the feedback from our diverse array of members who observed!

We are encouraging observers to attend the next meeting on Friday, August 4th at 9am at CLIMB. We need as many observers as possible to be a visible presence and show solidarity.

Will Mahoney-Watson, Acting VP of Communications, guest-writes this bargaining update.

Your FFAP and FCE bargaining team met with the administration team this week on Tuesday, July 18th at the CLIMB Center, for a scheduled meeting from 9am to noon. There were no new items on the agenda.

The Admin team asked us to prioritize our requests. Joint Federations Bargaining Team member Shirlee Geiger read this Team Statement of Priorities. After a brief caucus, the Admin team said they needed “realistic proposals” and ended the session, even after our team offered to talk about that we might be able to offer in return.

The meeting ended at that point at 9:50am, without having accomplished anything else. The Federations felt that the meeting could have continued with exchanges of proposals and productive discussions, especially since there were 20 observers who made time to attend the meeting.

We are encouraging observers to attend the next meeting on Thursday, July 27th at 9am at CLIMB. We need as many observers as possible to be a visible presence and show solidarity.